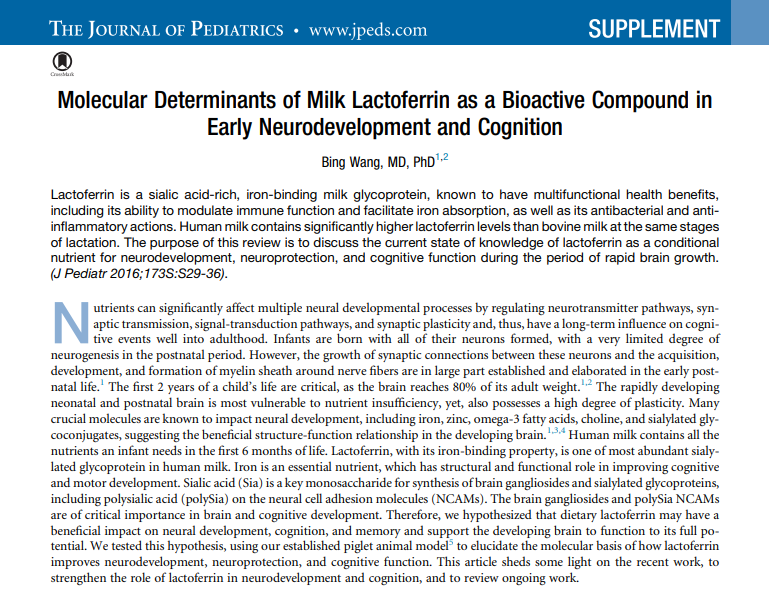 Lactoferrin is a sialic acid-rich, iron-binding milk glycoprotein, known to have multifunctional health benefits, including its ability to modulate immune function and facilitate iron absorption, as well as its antibacterial and antiinflammatory actions. Human milk contains significantly higher lactoferrin levels than bovine milk at the same stages of lactation. The purpose of this review is to discuss the current state of knowledge of lactoferrin as a conditional nutrient for neurodevelopment, neuroprotection, and cognitive function during the period of rapid brain growth. (J Pediatr 2016;173S:S29-36).

Nutrients can significantly affect multiple neural developmental processes by regulating neurotransmitter pathways, synaptic transmission, signal-transduction pathways, and synaptic plasticity and, thus, have a long-term influence on cognitive events well into adulthood. Infants are born with all of their neurons formed, with a very limited degree of neurogenesis in the postnatal period. However, the growth of synaptic connections between these neurons and the acquisition, development, and formation of myelin sheath around nerve fibers are in large part established and elaborated in the early postnatal life.1 The first 2 years of a child’s life are critical, as the brain reaches 80% of its adult weight.1,2 The rapidly developing neonatal and postnatal brain is most vulnerable to nutrient insufficiency, yet, also possesses a high degree of plasticity. Many crucial molecules are known to impact neural development, including iron, zinc, omega-3 fatty acids, choline, and sialylated glycoconjugates, suggesting the beneficial structure-function relationship in the developing brain.1,3,4 Human milk contains all the nutrients an infant needs in the first 6 months of life. Lactoferrin, with its iron-binding property, is one of most abundant sialylated glycoprotein in human milk. Iron is an essential nutrient, which has structural and functional role in improving cognitive and motor development. Sialic acid (Sia) is a key monosaccharide for synthesis of brain gangliosides and sialylated glycoproteins, including polysialic acid (polySia) on the neural cell adhesion molecules (NCAMs). The brain gangliosides and polySia NCAMs are of critical importance in brain and cognitive development. Therefore, we hypothesized that dietary lactoferrin may have a beneficial impact on neural development, cognition, and memory and support the developing brain to function to its full potential. We tested this hypothesis, using our established piglet animal model5 to elucidate the molecular basis of how lactoferrin improves neurodevelopment, neuroprotection, and cognitive function. This article sheds some light on the recent work, to strengthen the role of lactoferrin in neurodevelopment and cognition, and to review ongoing work.