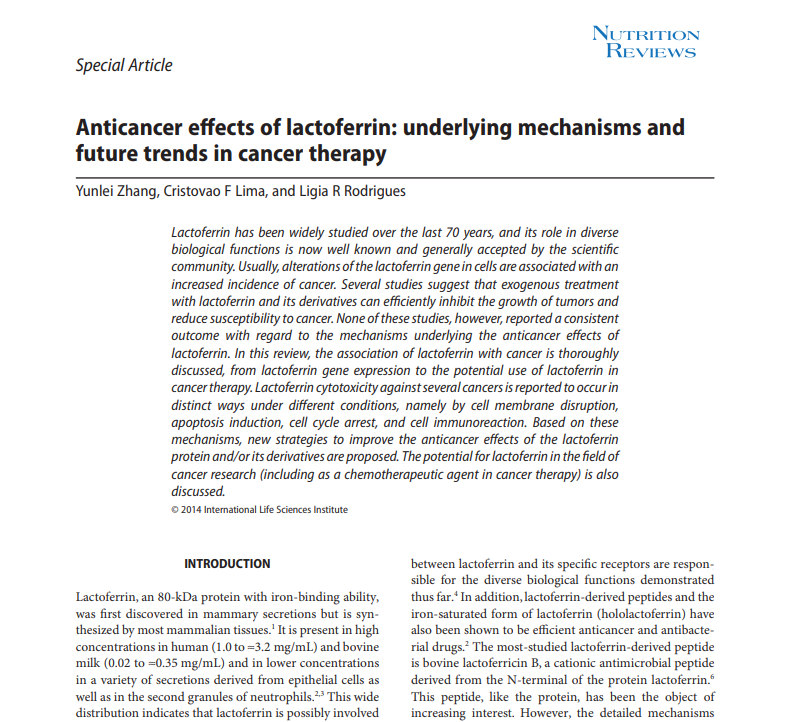 Lactoferrin has been widely studied over the last 70 years, and its role in diverse biological functions is now well known and generally accepted by the scientific community. Usually, alterations ofthe lactoferrin gene in cells are associated with an increased incidence of cancer. Several studies suggest that exogenous treatment with lactoferrin and its derivatives can efficiently inhibit the growth of tumors and reduce susceptibility to cancer. None of these studies, however, reported a consistent outcome with regard to the mechanisms underlying the anticancer effects of lactoferrin. In this review, the association of lactoferrin with cancer is thoroughly discussed, from lactoferrin gene expression to the potential use of lactoferrin in cancertherapy. Lactoferrin cytotoxicity against several cancers isreportedto occur in distinct ways under different conditions, namely by cell membrane disruption, apoptosis induction, cell cycle arrest, and cell immunoreaction. Based on these mechanisms, new strategies to improve the anticancer effects of the lactoferrin protein and/or its derivatives are proposed. The potential for lactoferrin in the field of cancer research (including as a chemotherapeutic agent in cancer therapy) is also discussed.