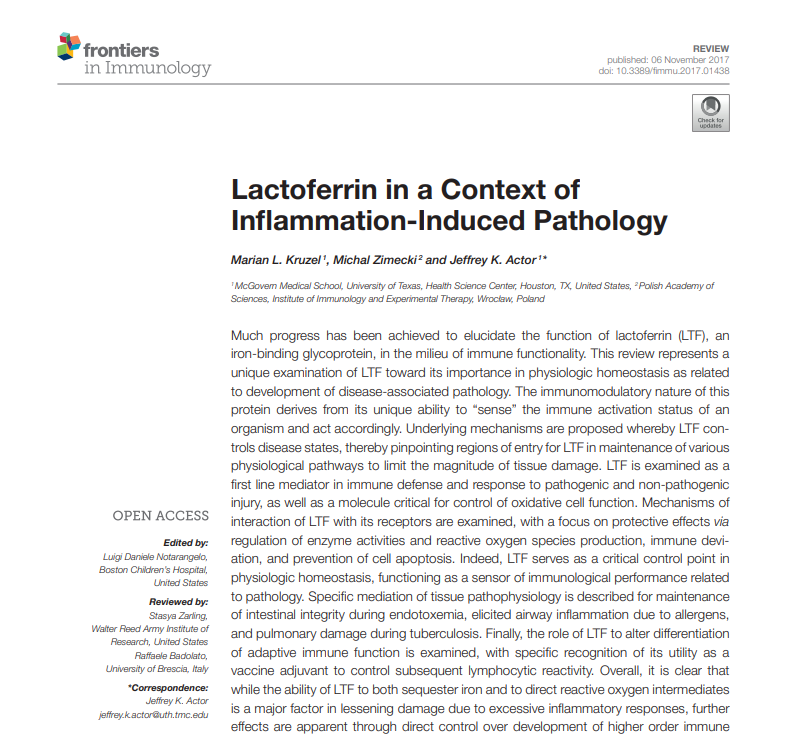 Lactoferrin in a Context of inflmmation-induced Pathology

Much progress has been achieved to elucidate the function of lactoferrin (LTF), an iron-binding glycoprotein, in the milieu of immune functionality. This review represents a unique examination of LTF toward its importance in physiologic homeostasis as related to development of disease-associated pathology. The immunomodulatory nature of this protein derives from its unique ability to “sense” the immune activation status of an organism and act accordingly. Underlying mechanisms are proposed whereby LTF controls disease states, thereby pinpointing regions of entry for LTF in maintenance of various physiological pathways to limit the magnitude of tissue damage. LTF is examined as a first line mediator in immune defense and response to pathogenic and non-pathogenic injury, as well as a molecule critical for control of oxidative cell function. Mechanisms of interaction of LTF with its receptors are examined, with a focus on protective effects via regulation of enzyme activities and reactive oxygen species production, immune deviation, and prevention of cell apoptosis. Indeed, LTF serves as a critical control point in physiologic homeostasis, functioning as a sensor of immunological performance related to pathology. Specific mediation of tissue pathophysiology is described for maintenance of intestinal integrity during endotoxemia, elicited airway inflammation due to allergens, and pulmonary damage during tuberculosis. Finally, the role of LTF to alter differentiation of adaptive immune function is examined, with specific recognition of its utility as a vaccine adjuvant to control subsequent lymphocytic reactivity. Overall, it is clear that while the ability of LTF to both sequester iron and to direct reactive oxygen intermediates is a major factor in lessening damage due to excessive inflammatory responses, further effects are apparent through direct control over development of higher order immune functions that regulate pathology due to insult and injury. This culminates in attenuation of pathological damage during inflammatory injury.