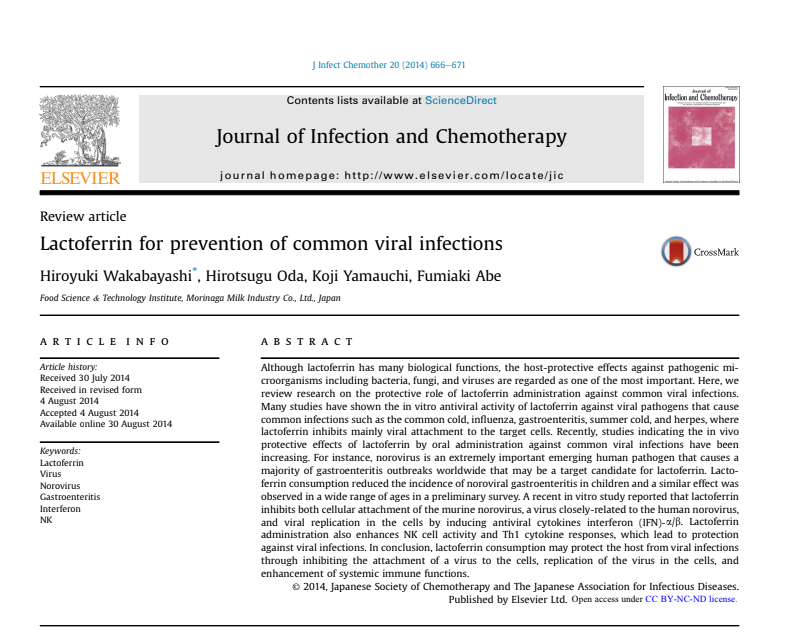 Abstract
Although lactoferrin has many biological functions, the host-protective effects against pathogenic mi- croorganisms including bacteria, fungi, and viruses are regarded as one of the most important. Here, we review research on the protective role of lactoferrin administration against common viral infections. Many studies have shown the in vitro antiviral activity of lactoferrin against viral pathogens that cause common infections such as the common cold, influenza, gastroenteritis, summer cold, and herpes, where lactoferrin inhibits mainly viral attachment to the target cells. Recently, studies indicating the in vivo protective effects of lactoferrin by oral administration against common viral infections have been increasing. For instance, norovirus is an extremely important emerging human pathogen that causes a majority of gastroenteritis outbreaks worldwide that may be a target candidate for lactoferrin. Lacto- ferrin consumption reduced the incidence of noroviral gastroenteritis in children and a similar effect was observed in a wide range of ages in a preliminary survey. A recent in vitro study reported that lactoferrin inhibits both cellular attachment of the murine norovirus, a virus closely-related to the human norovirus, and viral replication in the cells by inducing antiviral cytokines interferon (IFN)-a/b. Lactoferrin administration also enhances NK cell activity and Th1 cytokine responses, which lead to protection against viral infections. In conclusion, lactoferrin consumption may protect the host from viral infections through inhibiting the attachment of a virus to the cells, replication of the virus in the cells, and enhancement of systemic immune functions.